What Are Caulk Boots? 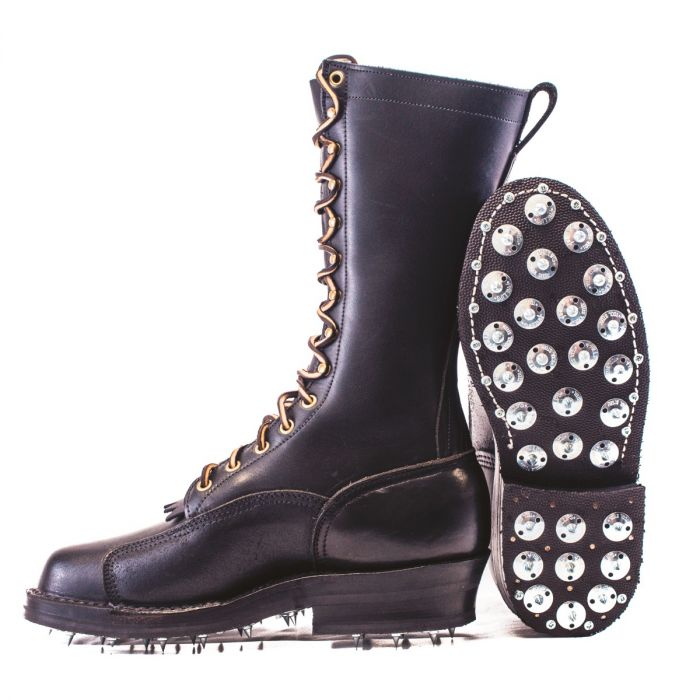 Caulk boots are a style of sole normally preferred and worn by arborealists, including tree service workers as well as loggers. They turn work boots into specialty footwear, so they aren't necessarily for everyone.

If you work in such a trade, getting a pair is definitely something you need to consider.

Caulk Boots Have Been Worn For More Than A Century

It isn't clear when the first calk boots emerged, but what is known is that they were being worn by loggers in America by the dawn of the 20th century. In fact, a number of boot companies were started to serve demand for precisely this kind of footwear.

Not only that, but similar footwear has been worn for thousands of years. Hobnail boots, which have studs attached to the soles, have been worn in Europe for centuries. The Roman legion's sandals - called caligae - were also studded for traction. Doughboys headed off to World War I with hobnail boots and so on.

The idea was, naturally, applied to logging boots in America.

The origins of the classic design of logging boots were during the latter 19th century, when certain features became sorely needed. The tongue has to also act as a dust guard. The boots had to have taller uppers than typical boots, around 8 to 10 inches. They had to be of sturdy construction, offer good support and traction, and provide some protection of the foot.

Loggers in the Pacific Northwest in particular needed more traction than the typical boot sole could provide. This was, after all, many years before Vibram soles were invented. In the rainy forests of the West Coast, slick logs and hillsides are treacherous. Someone came up with the bright idea to add nails to the soles for additional traction.

In fact, this led to the creation of the White's Boots company, who got their start making caulk boots for loggers in the early 1900s. The Danner boot company got a similar start, opening up shop in the 1930s making caulked logging boots for that area's loggers, which is a heavily active forestry region to this day...even if your typical uber-hip urban Portlandian doesn't know it!

Do I Need Caulk Boots?

Need can be relative, but it's safe to say that if you work in the forestry trade, whether as a logger or forestry service worker, caulk boots are something you'll want to consider. Besides the obvious benefit of a more strenuous work boot than what you can find in most stores, you'll also have the benefit of added traction on wet, uneven surfaces.

Caulked logging boots are serious working footwear. Raised heels for additional support and stability, durable construction and welted soles add up to one serious work boot. If you source them from a reputable bootmaker, you're investing in a pair of footwear that will let you stay safe on your feet in seriously unsure terrain.

Ever try walking uphill over mud or snow? You will know why caulked boots are needed.

For people who work in such a profession, your life literally depends on you keeping your feet. Logging is one of the most dangerous professions on earth, as dangerous as law enforcement or firefighting, when one considers the number of on-the-job injuries and fatalities.

Granted, many timber fellers, arborealists and forestry workers wear standard soles and - so long as quality lug soles are employed - are just as good on their feet. However, for those who encounter adverse ground conditions on a regular basis as part of their employment, it's worthwhile to consider a pair of calk boots.

We make one of the best pairs of caulk boots on the market.

Nick's Boots, like others, is a regular supplier of footwear to the timber and forestry industry, including one of the highest-quality designs of caulked logger boots money can buy - the Woodsman Boot by Nick's Boots.

The Woodsman is made with the same rugged construction as our other work boots, including hand-stitched McKay lockstitch welting and double polyurethane outsoles, with steel caulk nails. Our Legendary arch support, a Nick's Boots hallmark, is included, as are military-grade brass eyelets, and a raised slanted spring or block heel for the utmost in support on rough surfaces.

Our boots are made-to-order, with your choice of 8-, 10- or 12-inch boot height, with 14- and 16-inch boots available upon request. The sole is not rebuildable, but is replaceable if you order the RC caulk option.

If you need a serious pair of caulk boots for your work in the wilderness, contact us today for a consultation! We are here to help you be at your best on the job.