What Are Engineer Boots? 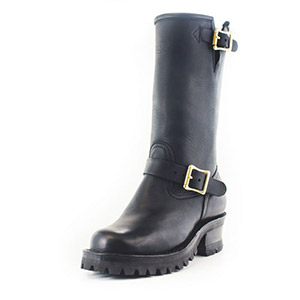 Engineer boots, also called engineer's boots, are a pull-on boot style that's pretty much only common among motorcyclists, though they are hardly the only kind that motorcycle riders wear. They're actually descended from practical footwear, but fell out of favor as work boots and became more or less fashion boots though there is still a practical use for them.

Functionally, they're halfway between heavy work boots and chore boots (what the British call "Wellingtons") that you'd wear doing casual chores outside. You get the ease of pulling them on, usually with a bit of adjustment, but close to the solid platform of serious footwear.

Here's what you need to know about engineer boots.

Where Did Engineer Boots Come From?

So, "engineer boots" have a bit of history to them.

In and of themselves, they are technically what's called "harness boots," which feature a strap that let the user snug the boot at certain points. Most have a harness over the top of the foot, to firm the fit and snug up the boot to the heel and thereby provide ankle support. Many feature another at the top of the boot to tighten around the calf.

Riding boots of this design were popular even in the 19th century, but eventually a pair was released with the metal ring harness seen on most engineer's boots today, which were adopted by the US cavalry. The story goes that a pair of that style of boot were eventually made by Wesco, who marketed them as "engineer's boots" to railway workers in the early 20th century.

The boots in question were marketed and sold to railroad workers, who needed a taller boot that provided protection for their feet and lower legs working on coal-fired steam engines. However, the ability to take them off easily was a selling point as well.

Remember, these were work boots; the people wearing them did not, in any way, think of them as a fashion statement. The people that wore them gave about as much thought to them as you might a pair of cheap rubber boots that you wear mowing the lawn or something.

How did they get fashionable, though?

What made engineer boots stylish? Mostly, the post-war motorcycle culture, which also made them a popular choice of motorcycle boots.

What you need from riding boots are protection from the heat of the exhaust and engine, as well as durable construction and comfort for riding. Uncomfortable footwear will make that pleasant cruise a lot less pleasant!

Just like the train workers before them, what motorcyclists noticed and appreciated was the ease of putting them on and taking them off, the hardy construction and - with proper adjustment - the bit of support necessary to make them comfortable.

Also, they look cool. Let's not mince words. It's like something a pirate would wear if you put one in the 20th century, and that's awesome. James Dean wore them in "Rebel Without A Cause," so he definitely helped sell a few pairs.

They also became popular in women's fashion, as calf-length boots are definitely a great look with jeans.

Today, they're just one option of motorcycle boot; there are many more styles. Some riders prefer something like a standard work boot, especially those who ride heavy cruisers and then you have your cafe racers who prefer lighter footwear. That's up to the individual rider, of course.