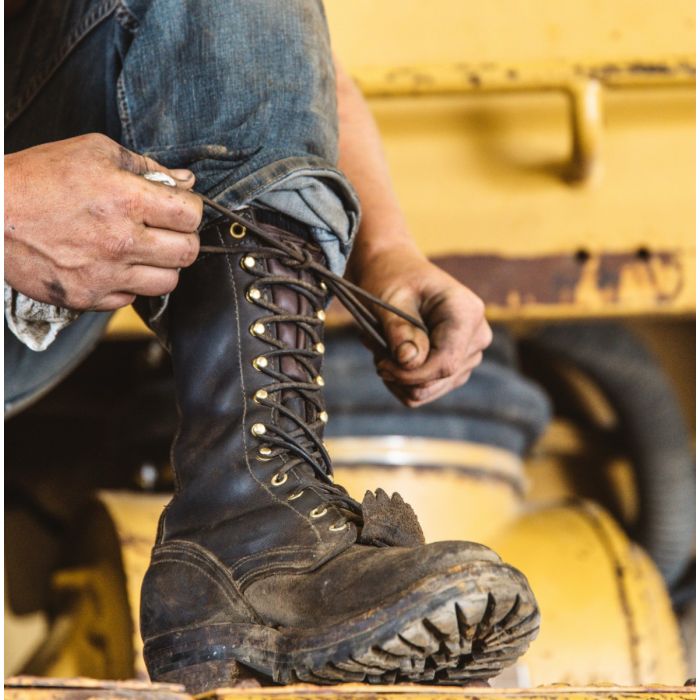 Winter will always come again, but what are the best boot soles to have for the time of year when inclement weather makes footing a little more treacherous?

This is a good thing to consider if ordering a pair of high quality leather work boots that will be worn outdoors in inclement weather, or if you just prefer a quality pair of boots for winter wear and general use. After all, some people do invest in high-quality items like Nick's Boots or Filson clothing because they want gear that lasts.

There are many different designs of boot soles out there, of course, but the vast majority of boots come with one of a few sole designs. Which is the best for winter wear?

Wedge Sole Work Boots: Utmost In Comfort, But Not Grip

Wedge sole work boots are very popular for use in many industries and also as general-purpose boots for everyday wear as light work boots. There's very good reason for it, as the wedge sole acts almost like a shock absorber, making boots with this design of sole incredibly comfortable even on hard surfaces.

However, wedge soles also have minimal texture, which makes them not the best choice of winter footwear if you live in an area where a lot of moisture accumulates in the form of rain, snow or ice in winter months.

Think of it kind of like your car tires. Winter tires will have more aggressive tread and siping, keeping water out of the tread and ensuring the utmost in traction. Wedge soles, like summer tires, are fantastic for when the roads are dry and conditions are generally pleasant. However, you want something a little gripper when it gets nasty.

Lower profile tread boot soles such as Vibram's V-bar and leather soles are popular for use with fashion boots and high-end leather shoes, and for good reason. They aren't incredibly heavy, they don't mar floors, and - provided you aren't putting mile after mile on pavement every day - will last a reasonably long time.

However, they aren't without limitations.

Such soles aren't the longest-lived when subjected to heavy use. Leather and cork sole dress shoes aren't intended to be worn if walking much further from the car to the office and back. Additionally, low-profile soles are also known to lack for traction, as much more than moderate rain or snow will get into any tread.

More than one person has hydroplaned on their feet in this kind of footwear. While it's funny to think about someone's feet going out from under them in a $3,000 suit - the idea certainly brings a smile to one's face! - a cracked tailbone is not, and it happens with poor traction in the right conditions.

This is why dress shoes are supposed to be paired with overshoes with more aggressive tread in winter conditions.

Half-lug soles are the halfway point between fashion shoes and heavy work boots. If you need good traction, but don't necessarily need a vice-like grip on the surface you're spending time on, any half-lug sole is a good choice during winter for work boots or heavy shoes.

If you work outdoors but not necessarily in a job with the most perilous footing - say in construction, as an electrician or other trade that puts you on worksites in populated areas - then a half-lug boot is certainly a good choice if your winters aren't terribly brutal.

However, for linesmen, loggers and other trades that require the surest of footing possible, there can be no half measures.

When it comes to leather work boots, outdoor boots or indeed any footwear, the gold standard of boot soles is the lug sole. When Vibram released its original lug sole, it was for mountaineering, and that incredible grip has made it the standard for any heavy duty boot that takes the wearer into treacherous terrain or conditions.

If you work on uneven ground, especially with slick rain or heavy snow being a distinct possibility, a lug sole is absolutely what you need. In fact, it's the right choice for those jobs even in fairweather conditions. With Vibram's new Red X Fire lugs, firefighter's boots can get the same full lug traction with the added benefit of fire resistance

However, some find lug soles uncomfortable if worn on hard, level surfaces; people who spend all day on their feet on a concrete factory floor may find a different design to their liking. But for those whose jobs are a little more rugged, lug sole work boots are definitely necessary.